Van Hoecke has obtained its new Factory of the Future certification. As a supplier of furniture fittings and manufacturer of drawer systems, Van Hoecke has been working for years with a mass customisation system. This is the story of a pioneer whose successful transformation started more than 20 years ago. How did this happen? By taking a long-term view, with a strong commitment from all employees and the desire to take the burden off the customer. But what really makes all the difference is the willingness to innovate in all areas of the company.

Steven Muylaert and Sven Van Raemdonck – Van Hoecke’s Operations Manager and Plant Manager respectively – are beaming at the beginning of this interview. 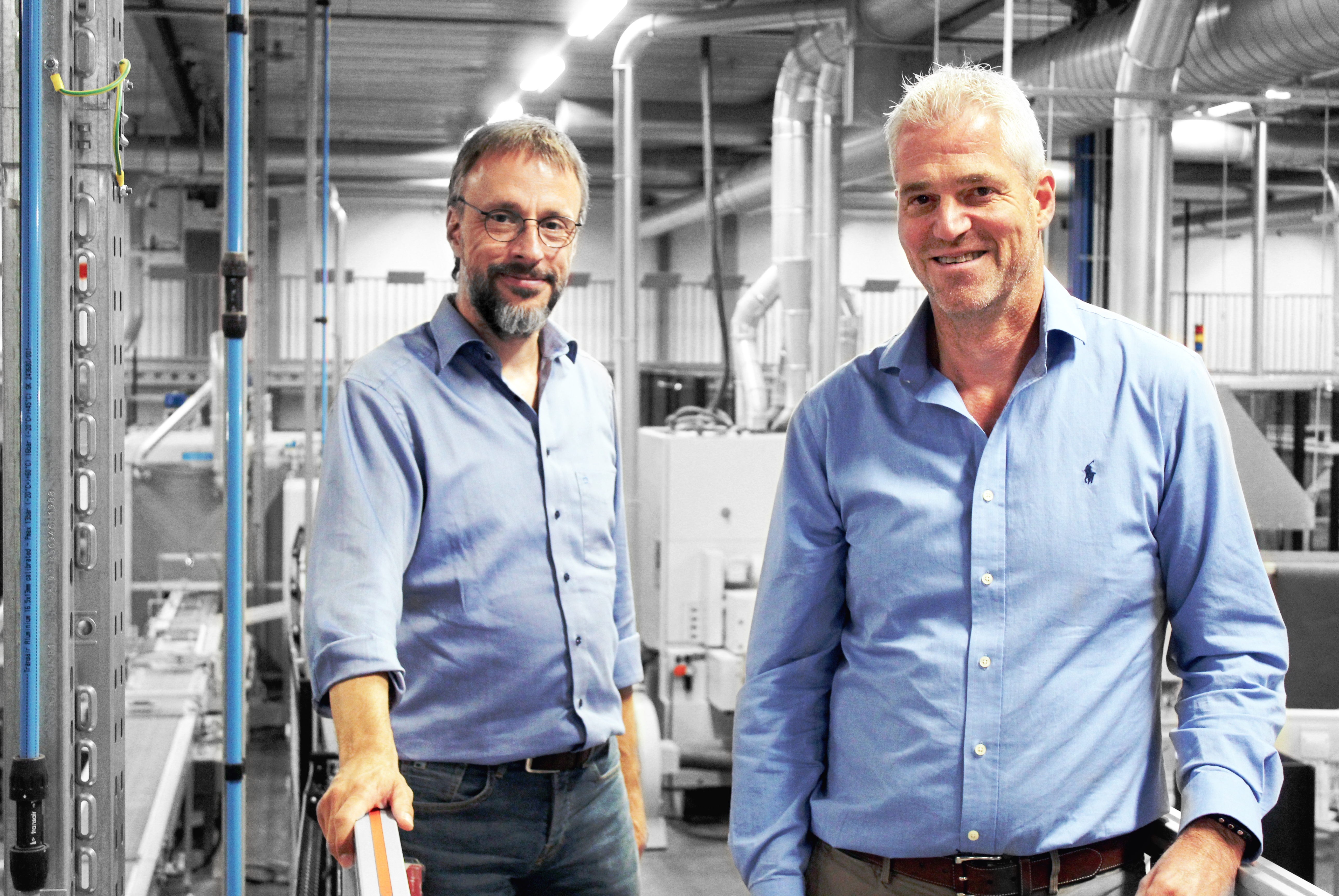 Rightly so, because their first Factory of the Future award has just been renewed on the basis of a new certification. However, the company owes this initial recognition in 2016 and its confirmation this year to a strategy that was implemented much earlier, as Sven Van Raemdonck points out: “Van Hoecke has been around for more than 50 years. In the early years, we were a purely commercial company that sold the components of the drawer systems of the Austrian manufacturer Blum exclusively in the Benelux. Kitchen builders, joiners and carpenters bought our hinges, hinged door fittings, guide systems and rails for kitchen and bathroom drawers, and then began to manufacture the drawers themselves to measure for their customers. Just after the turn of the century, we gradually changed our focus and opted for the strategy of assembling these drawers ourselves for our customers”.

From supplier to manufacturer

A decision that changed everything, according to Steven Muylaert: “Twenty-five years ago, the choice on the market was limited. There was a choice between cream, white and grey. There was only a single-walled version and the number of heights and patterns available was also limited. At that time, kitchen builders often chose certain ranges and bought large quantities to keep them in stock. The choice of their customers was therefore limited to what they had in stock. Gradually, however, more and more versions came into being: new colours, different patterns and double-walled drawer versions, for example. But with each new version, the number of variants also increased considerably. It therefore became very complex for carpenters to continue to offer this growing range.

We decided to take the burden off our customers by taking responsibility for the complexity of all these variants. In this way, manufacturers could offer their customers any pre-assembled drawer. 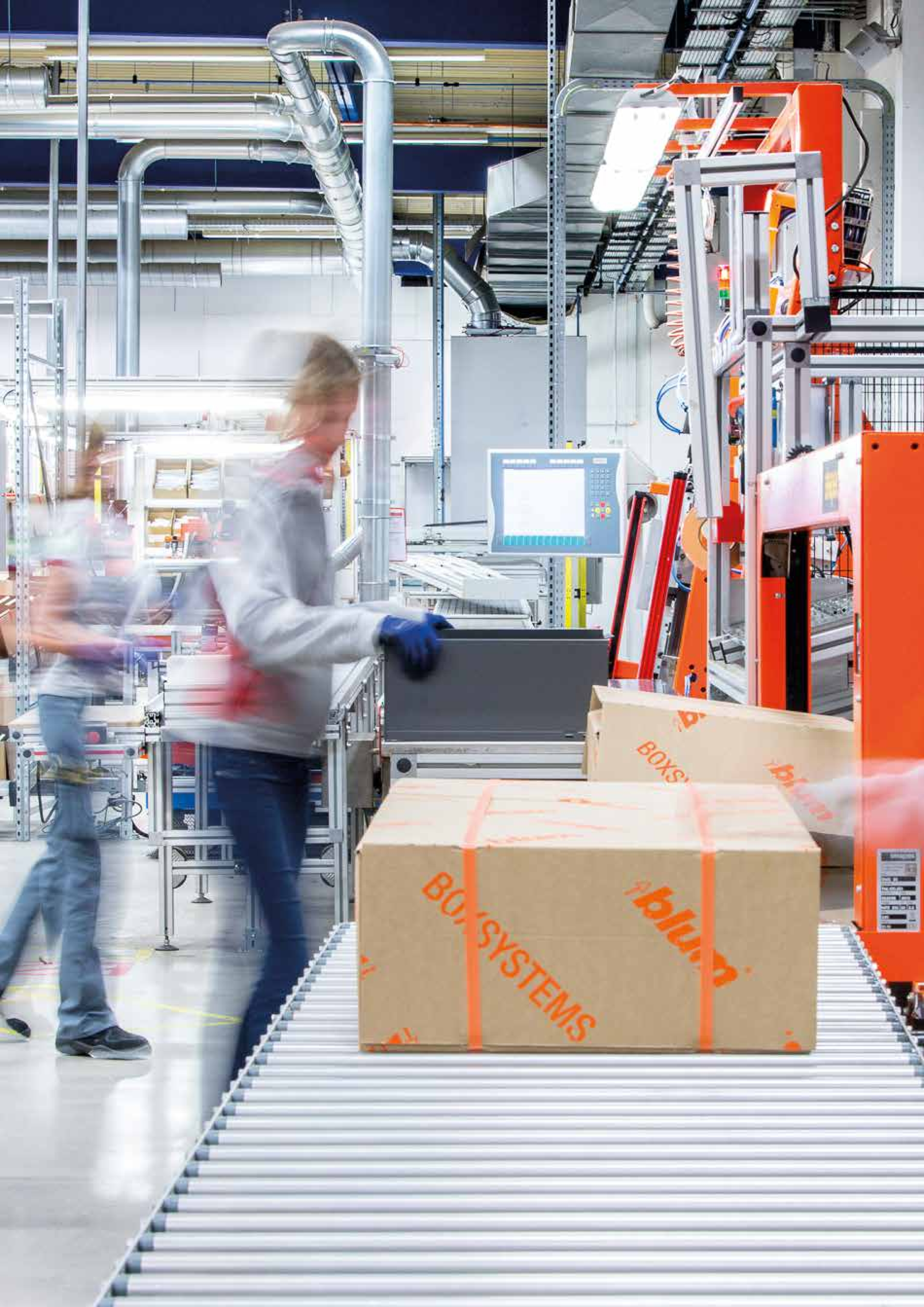 Sven Van Raemdonck: “What is important in this story is that we were already working with an online customize at the time. It enabled carpenters to compose their own drawer system via a simple selection, but without the requirement of a minimum order quantity. The customer chooses the final appearance of his product and orders a single unit, for a truly tailored product.

However, the drawers are usually only ordered when the kitchen is almost ready. Installers want to be sure that their drawers will be fitted properly, as their dimensions do not always correspond to the actual situation on site. These last-minute orders require a certain speed and flexibility in order to limit the time between order and delivery to 72 hours. The ‘Remove all friction’ pillar is therefore an important and justified objective in our strategy.”

Discover Van Hoecke, factory of the future, in this video:

Tailored work with size 1 batches that must reach the customer in a limited time: this implies an adapted level of automation. Sven Van Raemdonck: “Absolutely. Every machine here is tailor-made. This was a conscious choice, because we have a different vision with regard to transition times. We want the transition time of a product to be included in the cycle time of that product. A machine that has to switch from product A to product B should not waste time adapting and repositioning itself. We do this by giving information about each product with the product itself, by means of a bar code or by entering the sequence of the products. By the time the operator puts the finished part away, the information for the next part has already been read and the necessary adjustments have already been made. This makes it possible to implement true mass customization. It doesn’t matter whether we produce a thousand identical parts or a thousand unique parts: the production time will remain the same.” 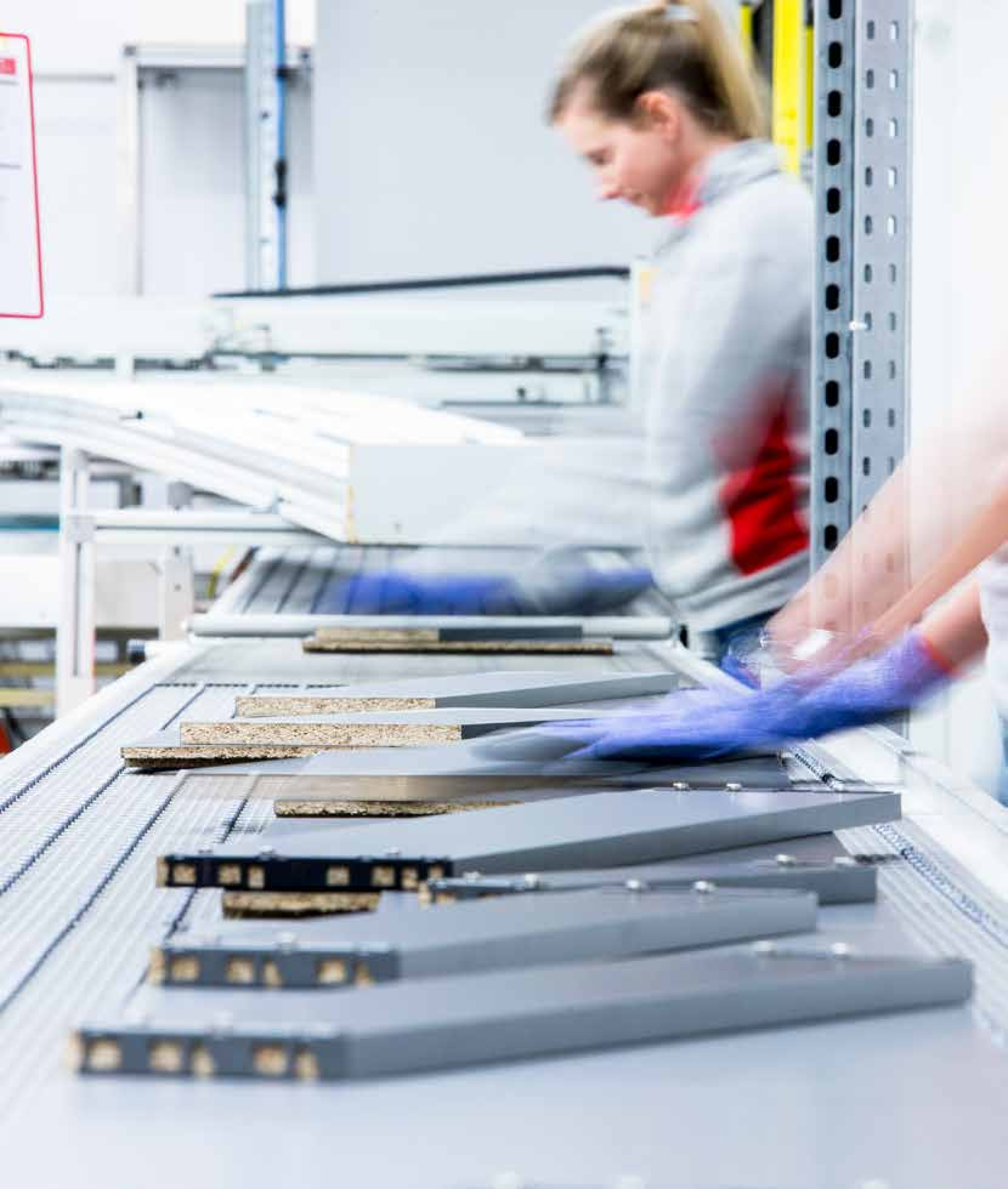 Of course, this vision also has repercussions on the machine fleet, as they have to be perfectly adapted to this method of working.

“This often means a higher purchase price, but opting for customised machines has enabled us to achieve the desired levels of flexibility and complexity. We currently produce around 2,700 drawers per day using Blum’s basic materials. With the bottoms and backs of drawers that we cut and machine, we have all the components to assemble a drawer. We also have our own line called Ta’or, which begins by machining panels. This line handles more cutting, chamfering, milling and gluing work.

“Innovation runs in our veins”

The fact that Van Hoecke is a pioneer in the philosophy of batch size 1 is not surprising in itself, because the company has always been driven by the innovation that runs in the veins of its managers. “From the very beginning of computerization, this company has been looking for ways to improve its operations,” said Mr. Muylaert. “For example, the very first Burroughs computer in the region – which still used punched cards – was in our company. The transition at the turn of the century from distribution to production was really a key moment in our history, but it wasn’t necessarily easy. Major steps were taken very quickly, we had to find the necessary know-how and the company gradually moved to a Lean working method. When we heard about the ‘Factory of the Future’ programme in 2015, we were quick to react: ‘This could be very rewarding’. From the very first contacts, we realised that the strategy that we had been operating for many years was the right one, because many of the factors in the programme were reflected in our daily operations. Later, when we compared the list of seven transformations with the possible points for improvement, the reaction was very enthusiastic. We received our first award in 2016.”

The second certification last year was a logical continuation for the company. “Once you have adopted the Factory of the Future philosophy in your day-to-day management, you are, so to speak, automatically one step ahead of any transformation. When, at one point, we looked back over the last few years since our first certification, we were surprised to see the measures we had implemented. We had already made progress on each of the seven transformations! This can be explained by the willingness to innovate that is omnipresent in this company,” said Mr. Van Raemdonck. Mr. Muylaert quickly agreed: “We are never satisfied, we are always looking for solutions for a better-quality result, produced faster or more efficiently. This is a consequence of the long-term vision of our management. Our CEO is extremely enthusiastic and identifies potential opportunities very quickly. This carries over to each and every one of our employees.”

In the production workshop, 4 giant screens attract the attention. Performance screens often feature in the Factory of the Future, but how are they used at Van Hoecke? Sven Van Raemdonck: “On our screens everyone can see the figures for the schedule and the current situation in real time. The blue indicates what has been scheduled: the darker the colour, the higher the occupancy rate. On the right side of the screen you can see the total number of drawers scheduled for today. At the bottom of the screen you can see, per production line, the deviation per hour of the actual number of drawers produced from the target. The goal is for people to have access to information to see the impact of their activities on the whole process. We can also use this screen for subsequent analyses to target the origin of possible problems.”

Even after recertification, the company never intended to rest on its laurels. “We are currently investigating systems such as pick-to-light & drop-to-light. This will enable us to further reduce the margin of error. On the sales side, too, we are very active. For example, we recently started to label our drawer systems with an RFID code. For many consumers, choosing a kitchen is a difficult decision, with an average of no less than 400 alternative or partial decisions. After a while, customers feel overwhelmed. We want to prevent that with an easier system for making choices. Therefore, even when the kitchen has already been installed, consumers can ‘scan’ their drawer with their smartphone and immediately see in our application which separation systems are available for that specific drawer. This saves time in the search process.”

As is the case in many companies, the focus is placed on workers in this Factory of the Future. Steven Muylaert: “The well-being of our staff is one of the pillars of our company’s operation. We started working with Stenwick Management Consultants years ago – long before Factory of the Future – to implement the Lean working method. At the time, we wanted to move from a hierarchical structure to a more autonomous and self-managed organization. They pointed out to us that we would only arrive at a Lean strategy if the change also came through our workers, which we started to do in the production department. The shop manager at that time was retiring, which made it possible to move ‘naturally’ to a system in which our workers functioned more autonomously. Everything was done gradually, through workshops and joint learning of new responsibilities and skills. We also started standing meetings at the beginning of each shift. This new approach went hand in hand with an investment in ergonomics and we started to fully personalise our workstations, with a significant contribution from all the workers.”

But it didn’t stop there. In order to break away from the old form of leadership, all team leaders had to adapt on a personal level.

“This transformation we have been working towards for years has been a real success, and then last year we felt a bit stuck. Every year, we hold a 2.5-day leadership seminar with our team leaders to work on our personal development and reflect on the future of our company. Last year, however, the preparations were not up to scratch. We wanted to involve everyone in the vision of our company’s future, not just the team leaders. That is why we decided to launch the ‘Hello You’ participation project, as part of which we invited every employee to answer two questions: ‘What would you absolutely want if we were to move towards greater autonomy?’ and ‘What would you absolutely want to avoid if we were to move towards greater autonomy?‘.

It was an unprecedented success; the reaction was overwhelming. We then grouped all the responses into themes and invited everyone to reflect on them in two-day workshops. No fewer than 2 x 80 employees responded to this non-mandatory invitation. We were able to target important expectations, such as the clarification of our sub-strategies and the need for flexibility in all possible areas: working hours, workplace, wages, work content, and more. In addition, these workshops also led to the creation of 5 Connect working groups which focus on connecting people with each other and connecting people with our organisation. For my part, all the outcomes of the Hello You project were the crowning achievement of the transformation.”

Belgian Factories of the Future and Machine Learning: What is possible and what is required for the manufacturing industry?