There are very few homes in Belgium that do not contain a power socket or switch by Niko, based in Sint-Niklaas. The innovative company has over a hundred years of history, spread across three generations. But this long history doesn’t stop the company from constantly looking to the future.

“The best proof of this? The Factory of the Future Award, which the company just received in its anniversary year. We visited them to find out how they accomplished this.”

Niko is historically rooted in Sint-Niklaas, which is where the company took its name from and it intends to remain there. The company was founded 100 years ago in the centre of the town as a producer of porcelain switches and power sockets. In the early years porcelain remained very popular, but in 1928 Niko already bought its first Bakelite press.

This was a long time ago but it’s typical of the drive for innovation that has characterised the company throughout the years. Niko quickly grew to become the market leader in Belgium and, under the impetus of the second generation, modern production techniques were implemented as of the 1950s. Under the second generation’s management, the luxury switch Inter 70 became an international success and, with the development of a dimmer, the first steps towards electronics were taken.

In 1993, Jo De Backer became the third generation to lead the company. It was an exciting period, with the arrival of the Internet, mobile telephones and digital developments. The company saw new opportunities, illustrated by the launch of Nikobus in 1997 followed in 2011 by Niko Home Control— which was an important milestone. Today 700 employees worldwide realise an annual turnover of € 175 million. 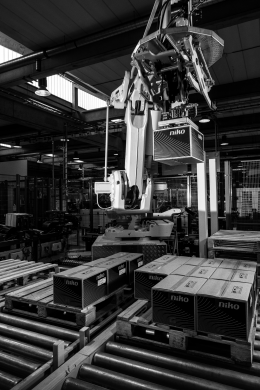 “Design and innovation form the foundation”

Vice-president of Operations Dirk Van Haeverbeek tells us a bit more about the common denominators throughout the company’s history: “A number of aspects are embedded in our DNA.

For example, our designs have won several awards.

Innovation is also a constant at Niko. We always try to stay on top because, despite our position in Belgium, we’re a relatively small player in worldwide terms. Ensuring you can implement innovation through R&D despite being a minor player is a tough challenge, we have managed well. Is there a better way to highlight that than with the Factory of the Future Award?

We are vertically integrated: we produce almost everything ourselves, from plastic granules to power sockets and switches. In order to do this, we have invested heavily over the years in our fleet of machines and in our employees’ continuing education. Maintaining our competitiveness is a tough challenge because the market doesn’t stand still.

Production batches of a single unit are occurring ever more frequently: more colours and shapes, as well as growing customisation, for example for hotel chains that want their own logo on switches. The batches are getting smaller, but this need not be at the expense of efficiency. Flexible automation, big data, digitisation … we’re working hard on all of this.

The ‘war for talent’ is also a major concern. Finding and keeping good people is a daily struggle.”

The challenges that Van Haeverbeek describes will sound familiar to many companies. These are things which almost every manufacturing company has to face today: “We identified with the seven transformations in the “Made Different” approach. This is one of the reasons why we joined the programme. World class production, end-to-end engineering, networked factory, digital factory, eco production, smart production and human-centred production: they’re all applicable to one degree or another.”

Daniël Hofman, New Technologies & Industrialisation Manager at Niko, tells us how Niko approached the transformations related to end-to-end engineering and world class production: “The end-to-end engineering approach feels like it was made for our company because, as we already mentioned, we manufacture as much as possible in-house. We create our own designs in-house: we program the electronical devices, design the parts, make the machines and produce the tools required to be able to manufacture the parts. Via flow simulations we can check beforehand whether the part meets all expectations. If that’s not the case, our specialists can still make changes to the cooling circuits, the structure or the mechanical assembly. The advantage is that we can lay several flow simulations on top of each other to check whether these can be built together. A 3D measuring machine is used to compare the produced parts with the CAD drawing. A simulation program can be used to check whether new machines would fit into our production system. The simulation program can also be used to train staff. We can see how the rods and pistons work in detail, which exact movements take place, and so on. Our goal is for operators to work fully independently with their machines. They should be capable of replacing sensors and other such tasks themselves.

Finally, I also want to mention our test lab, which we can use to perform CEBEC compliance tests in order to certify our products.” 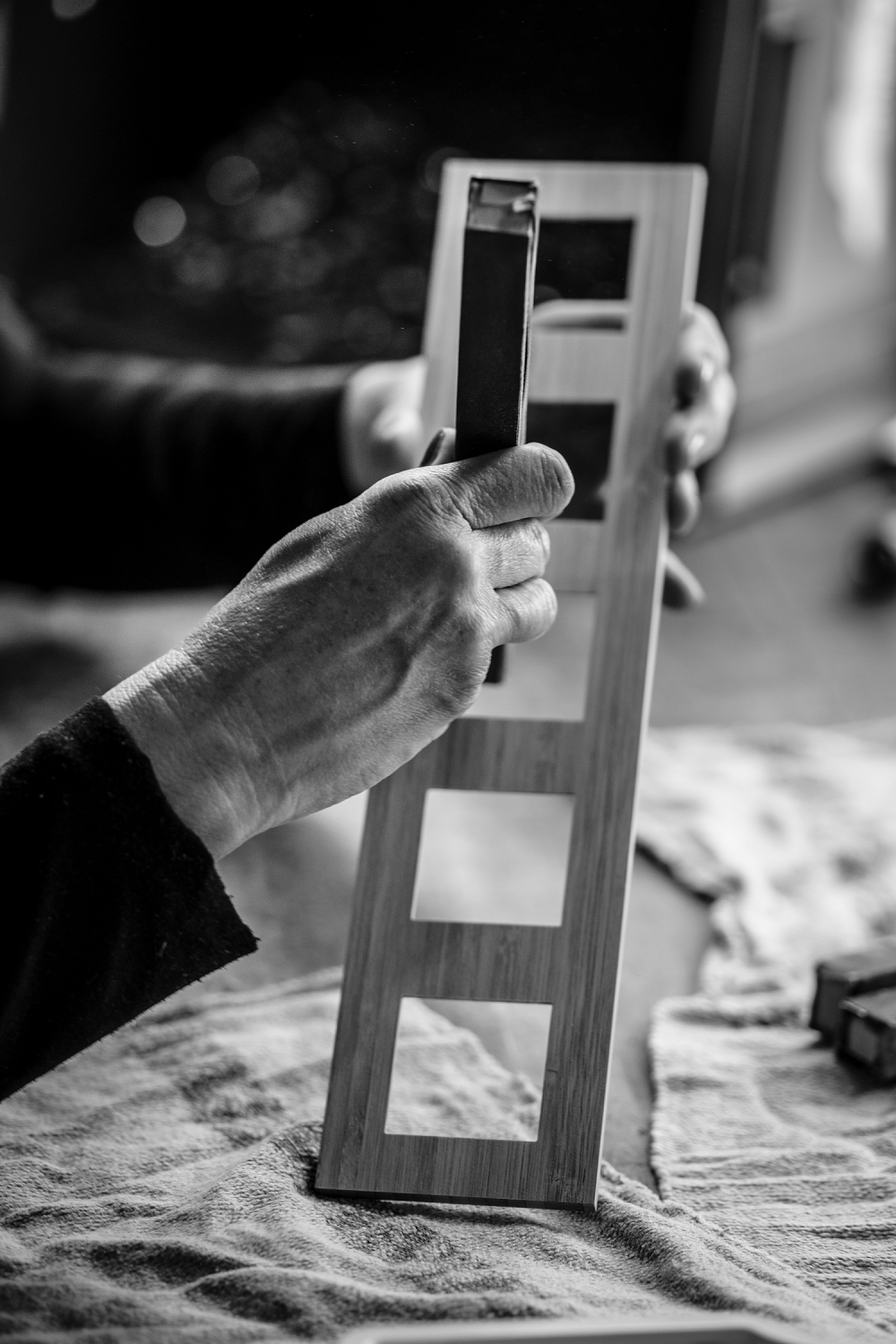 Niko has also invested in the area of World Class Production. Daniël Hofman: “We try to apply new technology as much as possible. 3D-printed metal parts are already well-established in our plastic moulds. For example, we are able to install cooling ducts, which ensure shape rigidity when the part is removed from the mould. With traditional machining techniques, this is not possible.”

“In recent years we have also invested in new Bihler machines which manufacture and assemble the metal parts. This work used to be split between the metal department and the machine department. As these tasks have been unified, the two departments are slowly becoming a single unit. The machine can be converted quickly from one type into another without requiring external parties. It has also been programmed with a high level of intelligence in order to avoid errors. If an operator accidentally adds brass instead of tin-plated material, the machine displays an error message.

Camera systems monitor measurements. Bases that are not up to quality standards are simply discarded. In a subsequent phase, we will add artificial intelligence. Programmed errors are currently being resolved but non-programmed errors can still occur. The objective of adding artificial intelligence to the system is to ensure it detects subsequent similar errors on its own. Monitoring the force exerted is another future project. The spindle is gripped using a predetermined force. In case of contamination, the force can be either insufficient or too much. Monitoring the force is, therefore, useful. Data is to be collected from the machine to be able to predict when something will go wrong.”

“The machine automatically converts when a problem occurs unlike other machines. It has two output conveyor belts. In the standard version, the product goes to another machine where the power socket is fitted with a bridge, claw or other part. If a problem occurs at this machine, it is automatically detected and the run-off is redirected to the second output conveyor belt which separates these parts from the rest of the parts. Once the problem is resolved, the machine itself converts back to production mode.”

The market is clearly moving towards smaller production batches. Where does Niko draw the line? Daniël Hofman: “Batches consisting of around 50,000 units are manufactured manually; from around 100,000 units automating the process is worthwhile. The market demands ever smaller batches, which means the risks of automating are greater. We are, therefore, setting up a flexible assembly line now, consisting of a combination of robotic and manual operations. We can manufacture several different products on the same line. If a product sells really well, we can switch to the automated line. A vibrating feeder is used to supply this Flexline. This means that each product can be added without adjusting the system. When using box feeders these had to be adjusted for every product change. The system also ensures we can continue to produce these types of products here.”

Van Haeverbeek continues: “The system can be described as soft automation. The investment is limited compared to the line with Bihler 6000 machines. The strength of this Flexcel is that you can limit the level of automation, which means that you can flexibly switch products. You can make a different product from one day to the next.”

“Employee commitment has been crucial during our journey to become a Factory of the Future” explains Els Versluys, HR Business Partner at Niko. “In 2016 we carried out a baseline measurement for our assembly jobs. It revealed that their tasks were located in the passive quadrant. The employees came in, their superior told them what needed to be done that day and they received the necessary instructions to carry out that specific task. We wanted to make these jobs more active, by giving people more autonomy, more responsibility. They can now prepare for production themselves, determine as a team how they can reach certain targets, determine how to perform their tasks and when they can or cannot go on leave. This meant that the employees had to adapt, particularly because the average seniority of the members of the assembly teams was relatively high. We gave everyone the space to adapt at his or her own pace. The managers also had to adapt and make an effort to motivate people and give them confidence. You can’t just improvise this; you need to create a framework for the transition. The company’s task is to set common goals and establish the boundaries within which work can be carried out. This is how they determine certain KPIs such as the service level, turnaround time, the number of units per hour, reducing the number of customer complaints, etc. The team is responsible for achieving the set goals. Once the framework is in place, the results are impressive. A good example of our approach is the line mentioned previously with the Bihler machine. It is a technically challenging machine, but we made a conscious decision to recruit the operators internally from among the assembly workers. Several of the operators we selected did not have technical training or did not have any formal training. Based on an in-depth training programme that included mechanics, machine operation, tooling and English lessons, they learned how to operate and convert the machine themselves. People can achieve much more with the right support.”